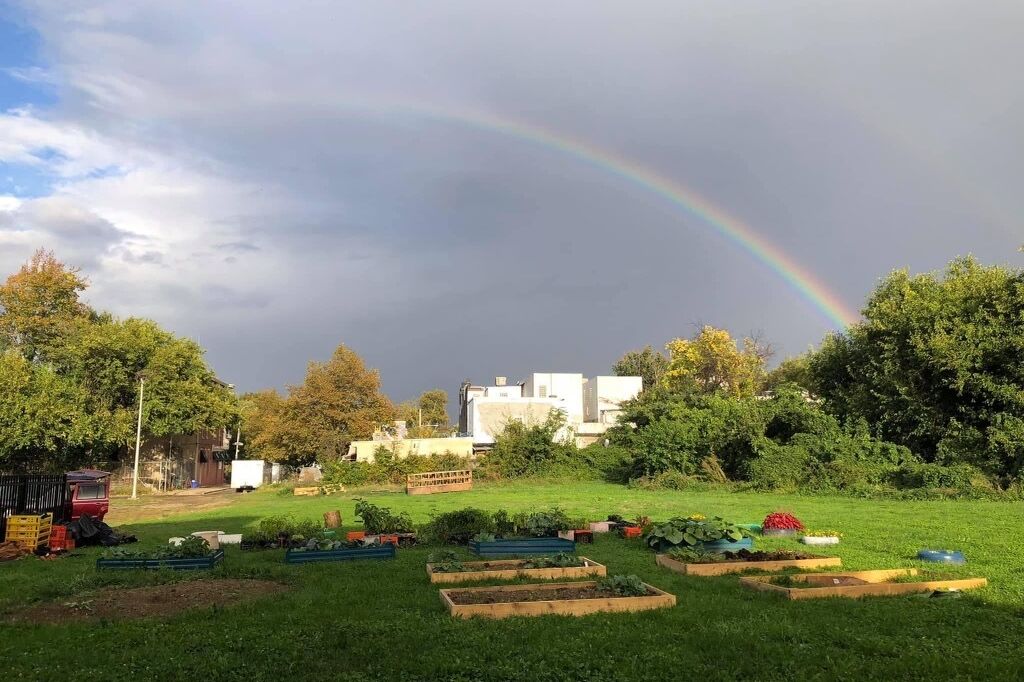 Jenia Jolley-Furtick is passionate about gardening and giving back. As an avid home gardener, associate dean, high school sports coach, and resident of Nicetown-Tioga in North Philadelphia, she is embedded in many aspects of the local community. Through her active community engagement, she was introduced to PHS and to Samir Dalal, a PHS Project Manager working in her neighborhood to engage residents to help create a 3-year greening plan.

Jenia connected with Samir over a love of gardening and green space and soon volunteered for PHS programs that use gardening to improve health and well-being — signing up to be a member of the Nicetown-Tioga “Green Team,” planting a pollinator garden on a vacant lot through PHS’s LandCare program, and completing both PHS Garden Tender and Tree Tender training. “Jenia has this beautiful desire to connect her community through gardening, and we are just there to support her and provide all the tools, resources, and capacity for her to succeed,” says Samir.

Jenia has been gardening at home since she was a teenager, inspired by her grandmother and the character Clair Huxtable on The Cosby Show. “I began to study urban gardening and grow things at home to give away to my kids and friends,” she says. “My married last name is Furtick, so we started calling it Furtick Farms because the food I was growing was for my kids and whoever in the family wanted to have it.”

Eventually, Jenia’s garden operation outgrew her North Philadelphia home, and she started searching for ways to expand her impact. In 2021, she partnered with Nicetown CDC and PHS to transform an abandoned community garden into what is now Furtick Farms — an expansive garden space that has enabled three times the production she could do at home.

In its first season, Furtick Farms was able to feed 82 families, thanks to what Jenia calls “My Bag It Sundays,” where anyone from the neighborhood can come to the farm and take home a bag of fresh produce for free.

Furtick Farms grows a wide variety of produce including watermelon, honeydew, peppers, chives, cabbage, kale, and more. Additionally, there are five fruit trees on the property, which Jenia hopes to one day expand into a small orchard. She also grows seasonal and specialty items like cupcake squash and yellow watermelon. “I try to grow things that people in the neighborhood may not have heard of or seen before,” she says.

Jenia has also hosted several free or low-cost events at the farm (both in-person and virtually, due to the pandemic) including gardening classes, movie nights, and yoga classes. She even started a kid’s gardening club called the “Seed Starters,” where kids from the neighborhood can choose what they want to grow, plant the seeds, and learn how to tend to them. “I'm creating something nice for the neighborhood — a community space where everybody gets to come ‘pow wow’ even if they're just curious and may not know much about gardening,” Jenia says.

The Future of the Farm

Jenia’s goal for Furtick Farms is to provide a space that makes gardening accessible to everyone in the community. She wants it to be a place where people of all ages can come together to connect with nature and one another. “My hope in providing this open green space is that it will benefit people’s mental and physical health, help combat food insecurity, and bring down violence and crime in the neighborhood,” says Jenia.

Over the next year, a $40,000 grant from the Philadelphia Collaborative for Health Equity, sponsored by Thomas Jefferson University, will help Jenia, PHS, and Nicetown CDC develop a community vision for Furtick Farms, combining this work with nearby tree planting and vacant greening to further advance health equity in the area. PHS’s work on the grant application further supports the Nicetown community at large. Working in tandem with PHS, the Neighborhood Gardens Trust (NGT) has begun working with the City of Philadelphia and the School District of Philadelphia to protect the land and secure permanent preservation for the site. These collective efforts will ensure that Furtick Farms can continue to flourish in the future — feeding more families and bringing even more people together through gardening.

PHS aids in the development of green spaces all through neighborhoods in the Greater Philadelphia region.

Explore Transforming Vacant Land
Sorry, your browser is out of date
The web browser you are using is too old to view this site. Please update your browser or use Internet Explorer 11 or the current version of Microsoft Edge, Firefox, Chrome or Safari. Thank you!