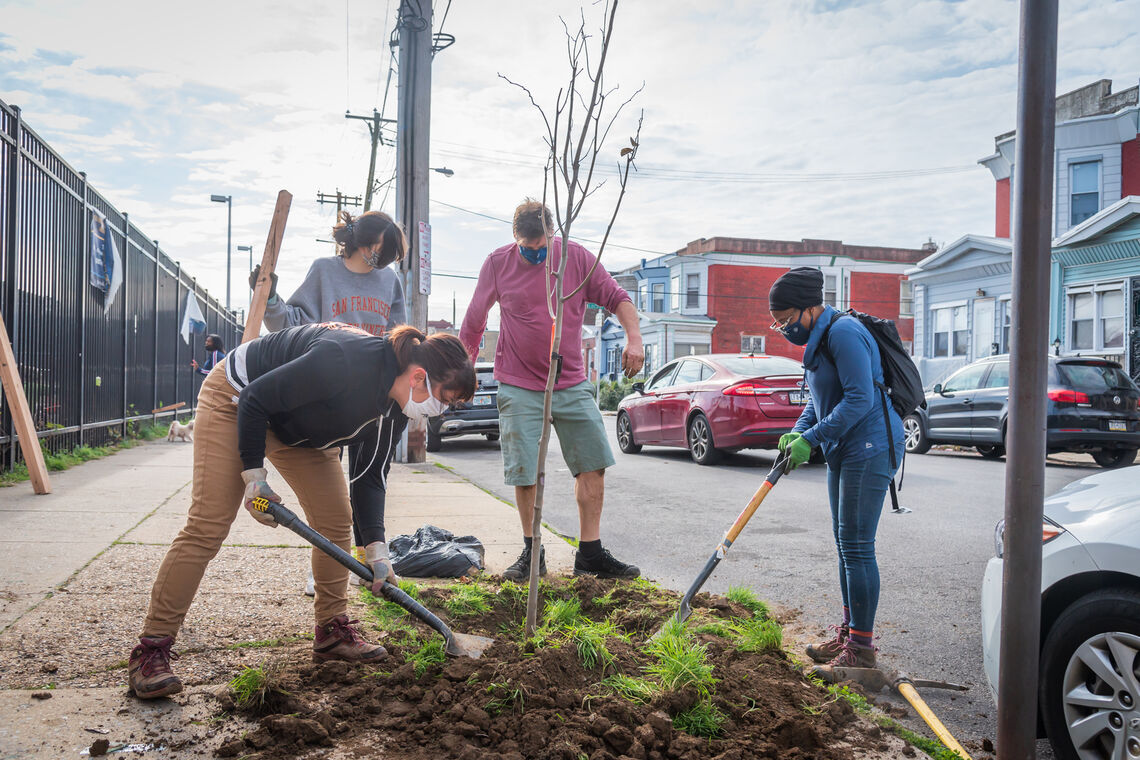 November 1, 2022 – PHILADELPHIA, PA- The Pennsylvania Horticultural Society is excited to announce that this November 18-20, over 90 of its PHS Tree Tenders groups, community organizations, and neighborhood volunteers will rally together to help plant trees throughout the Greater Philadelphia region. This semi-annual tree planting event will be the largest single volunteer planting event PHS has coordinated in its history, with more than 2,000 trees being planted over a span of 4 days.

Through this semi-annual initiative, PHS creates and enhances tree canopy in neighborhoods across the Philadelphia region to promote healthier, greener communities. No prior experience is needed.

LOCAL IMPACT STORY
Trees are an integral part of cities providing health benefits and beauty to communities. Abdallah Tabet, a resident of Philadelphia’s Graduate Hospital and certified PHS Tree Tender, will lead a group to plant over 60 trees this November. Since he became a PHS Tree Tender 4 years ago, Tabet has helped to facilitate the planting of more than 200 trees in the neighborhood. He is motivated to continue planting efforts in the area because of the incredible pride that the trees have brought to community residents. As the Graduate Hospital West Tree Tenders group has grown, more residents have become invested in the idea that street trees improve health and well-being, and have come together to plant, care for, and support these trees. What started as a small, 3-person operation has now grown into a neighborhood investment, with a large group of regular volunteers and local businesses getting involved to support ongoing planting efforts. On tree planting days, volunteers convene at a central meeting point, a local coffee shop provides free coffee and tea, and the Chester A. Arthur School lends its playground space as a staging and storing area for the trees.

As Tabet stated, “Now, when I’m walking to work, I know almost every single tree. I see how they’re growing, how people take care of them, and for me, this is very rewarding. Year after year, there’s more involvement...and I think it’s great that a lot of neighborhood organizations are helping us.”

WHY ARE TREES IMPORTANT?
PHS Tree Tenders is a core component of PHS’s mission to create healthy living environments and build social connections. It is regarded as one of the most robust urban tree planting programs in the nation and considered to be at the forefront of the urban forestry movement. The PHS Tree Tenders training program offers low-cost education in tree planting and care to individuals and volunteer community groups, with its reach extending to all 5 of Philadelphia’s surrounding counties, as well as the entire state of Pennsylvania. With support from Keep America Beautiful, a nationally recognized non-profit dedicated to environmental improvement, PHS Tree Tenders training is also conducted nationwide to model the program for other cities. Today, there are more than 180 active Tree Tender groups in the Greater Philadelphia region, and PHS has trained nearly 6,000 volunteers who have rallied neighbors to come together to plant and care for trees. Since its fruition, PHS Tree Tenders groups have planted over 25,000 trees in neighborhoods across the Greater Philadelphia region.

Studies have linked increased tree canopy (the area of land shaded by trees) to lower rates of violence and better health outcomes, including reduction in heat-related illness. The US Forest Service estimates that achieving 30% tree canopy would prevent 400 premature deaths per year in Philadelphia. However, according to a study conducted in 2018 by The City of Philadelphia and University of Vermont Spatial Analysis Lab, the city’s tree canopy declined by 6% from 2008-2018, averaging only 20% tree canopy, with some Philadelphia neighborhoods having as little as 2.5% tree canopy. Throughout the year, PHS plants and cares for trees and works towards the goal of a healthier urban forest, especially for neighborhoods with low canopy coverage and high average temperatures.

PECO is a longtime supporter of PHS, and a leading partner in the organization’s work to improve the tree canopy across Greater Philadelphia. In 2021, PECO provided a $100,000 sponsorship for TreeTender and TreeVitalize grants, which resulted in approximately 8,700 new trees and 1,400 new shrubs being planted. Earlier this year, as part of ReLeaf -- PECO’s program centered around the company’s increased investment in tree planting and education across the Greater Philadelphia region -- PECO increased its annual support of PHS to $200,000, furthering PHS’s efforts to plant 15,000 trees in 2022.

“PECO recognizes and appreciates the importance of trees in our communities, which is why we partner with community organizations like the Pennsylvania Horticultural Society to support the distribution and planting of trees across the region,” stated Romona Riscoe Benson, Director of Corporate & Community Impact, PECO. “As PECO works to play a leading role in the Greater Philadelphia region’s transition to a clean energy future, our ongoing partnership with PHS continues to be critical to our mission.”

HOW TO SIGN UP AND VOLUNTEER
Interested volunteers do not need experience and are encouraged to find an event in their area and contribute to the tree planting process, which typically lasts about 2 - 3 hours at the assigned site. A PHS Tree Tenders group leader will be assigned to all planting locations to educate and support the assigned volunteers. Everyone is asked to bring gloves, close-toed shoes, a shovel if you have one, and a water bottle. Supplies for plantings will be available onsite, including shovels, pickaxes, brooms, trash bags, and more. Participants are also asked to dress for the weather as plantings will happen rain or shine.

To sign up to volunteer for a tree planting event, please visit the link below.

OTHER WAYS TO SUPPORT TREE PLANTINGS
You can also support PHS’s tree planting programs by donating to the 2022 “More Trees Please” campaign. Each spring and fall, PHS works with volunteers across the Greater Philadelphia region to plant trees at little or no cost to residents. Gifts in support of “More Trees Please” provide critical funding that supplies the trees, tools, and resources needed to make these plantings possible.

Learn more at the link below.

COVID-19 Safety Policy
In line with the City of Philadelphia, PHS will abide by current health guidelines for its tree plantings. Up-to-date guidance is available at: https://www.phila.gov/programs/coronavirus-disease-2019-covid-19/.