Gardening for the Greater Good – October 2019 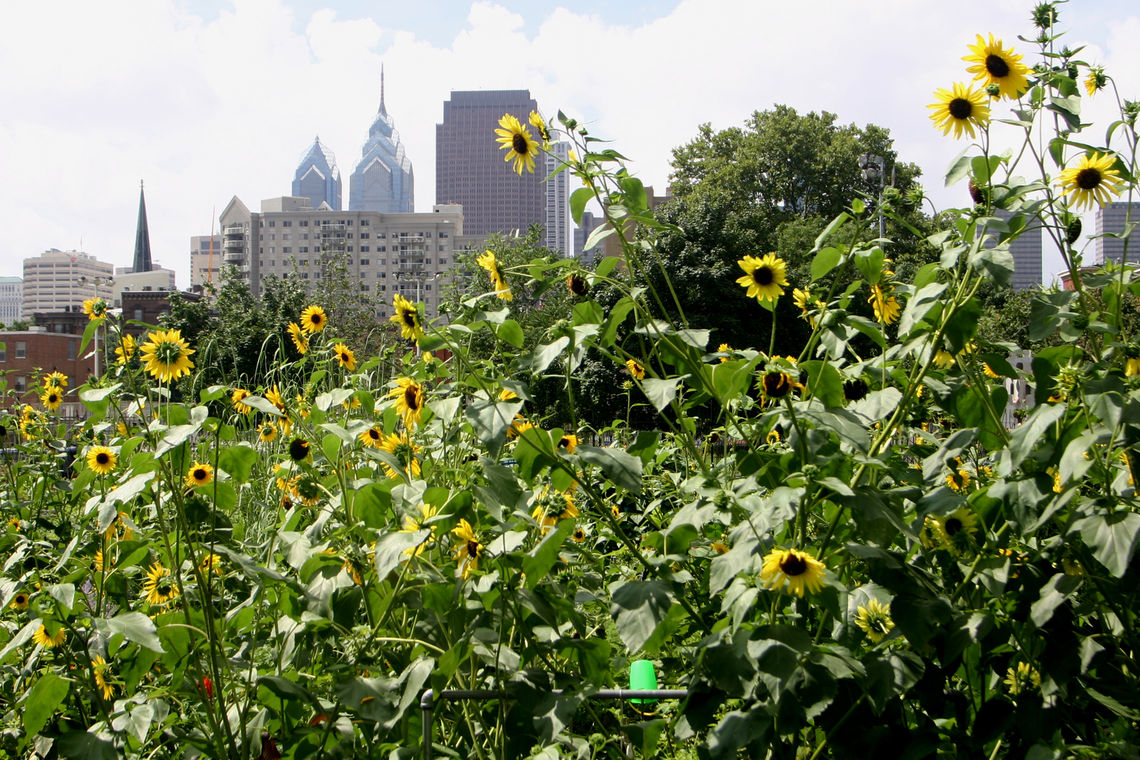 The Spring Gardens began in 1995 as a community garden for residents in the neighborhood and was one of the first community gardens to sign on to donate a percentage of their fresh produce to local food shelters through PHS’ City Harvest program. Over the years, this garden and a core group of 12 volunteers have consistently grown and donated 1,800 pounds of produce each growing season to local kitchens including the Sunday Breakfast Rescue Mission, St. Paul’s Food Cupboard, Share, and most recently, Zia at Waring Elementary School across from the garden – making it one of the largest City Harvest growing operations in Philadelphia.

The garden got its start in 1995, when then-City Council aide Darrell Clarke helped remove rubble from the abandoned lot and provided topsoil. The following year raised beds were added. Anne Cook, a retired paralegal, and her husband, who live two blocks west of the site, began gardening at Spring Gardens in 2006 and she has never stopped.

“People from the east and west sides of Spring Garden and some residents of Fairmount all came together to garden. It’s a garden that brought people together 25 years ago and it continues to that today,” says Cook. Many of the original group of gardeners still garden there today in one of the garden’s 200 plots, bringing the total number of gardeners to several hundred. “The demand for a 10 x 10 or 10 x 20 plot is high, with a waiting list that takes an average of three years,” says Cook.

A group of dedicated gardeners and volunteers meet weekly every Tuesday night to garden, weed, and discuss whatever is on the docket. Marcia Connolly handles the distribution of the produce each week.

“PHS provides us with the tools we need -- buckets, row cover, hoops, and stakes, and keeps us supplied with these items,” says Cook. “The important thing they give us is the organic seedlings and seeds at distributions that take place throughout the year.”

Spring and fall cool weather crops of brassicas, including broccoli, collards, bok choy, and mustards, have been very successful. In May and June, the garden is thriving with tomatoes, peppers, eggplant, and squash. In August, the cool weather crops are back. “There’s no way to grow them without row covers because every season has its invasions,” says Cook. “We minimize the use of any chemicals by using the covers as well as sticky traps to catch bugs. It’s all about outsmarting them. They’ll win some, and we’ll win some.”

Cook and the other gardeners spray a solution of water and kaolin clay onto the leaves of certain plants. The substance dries and creates a barrier to protect the plants from the cucumber beetles that are especially fond of melons, cucumbers, and squashes. They also put the row cover on early to give the plants a fighting chance.

“We donate our produce to kitchens that prepare meals,” Connolly. “On Wednesday mornings we deliver our produce to the Sunday Breakfast Mission at 13th and Vine or St. Paul’s food cupboard at 10th and Wallace. If we have an overabundance of certain items, like scallions and hot peppers, we bring them to Share on Hunting Park Avenue.”

“We recently added a Friday distribution to Zia, the new food cupboard at the Waring Elementary School across the street from the garden,” says Connolly. Waring has a high percentage of children who fall below the poverty line. Zia is bringing nutrition to a third-grade classroom by putting together boxes of meals to be cooked at home. The meals include a protein, vegetables, recipes and condiments. “We’ve donated about 25 pounds of produce a week to the program – most recently green beans, peppers, and tomatoes,” says Connolly.

“I really enjoy the relationships that I have made with the folks who run the food cupboards and the cooks who prepare the meals,” says Connelly. “They are amazingly generous with their time and energy!”

“We give our time and we take pride in what we do,” says Cook. “There’s a sense of camaraderie and friendship that have developed.”

Spring Garden’s beauty goes beyond the food harvested and donated and the volunteers’ dedication. Nothing obstructs the view down the hill, towards the Center City skyline. “This is one of the prettiest gardens I’ve seen,” says Justin Trezza, PHS Director of Community Gardens, “and the gardeners are extremely committed. Trezza adds that the gardeners keep increasing the size of their growing area for donated crops and are in the process of installing an irrigation system with funding from PHS’s Legacy Landscapes endowment.