The Power of Place-Based Greening Can Transform Cities Everywhere 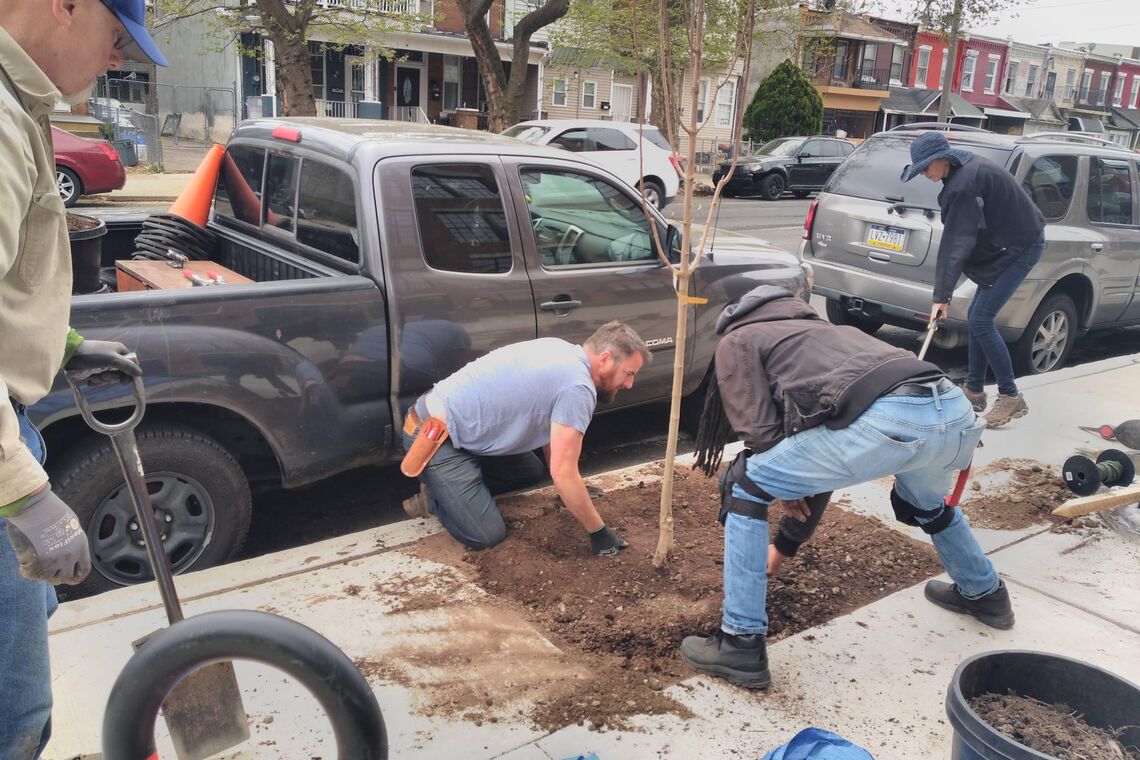 Robin Potter, Chair of the Board of PHS, has been passionately involved in the mission of PHS for decades – as a volunteer, Tree Tender trainer, co-chair of the Philadelphia Flower Show’s Early Morning Tour guides, and Board member. So, when Robin heard about an opportunity to pilot a new place-based urban greening initiative in the Nicetown and Tioga neighborhoods in North Philadelphia, she jumped at the chance to be involved. She says, “Over the last few years, as we went through PHS’s Vision 2027 strategy exercise and focused on the impact of the work PHS has been doing for almost 200 years, one of the things I was most excited about was the opportunity to take the programs within the Healthy Neighborhoods team – tree planting, transforming vacant land, community gardens, and workforce development – and pull them all together in one project that could act as a model for urban greening at scale.”

PHS has decades of experience advancing the health and well-being of the Greater Philadelphia region and its further exploration of integrated, "place-based" greening work began in 2018 with funding from Allen Model and the Leo Model Foundation. The foundation sought to help PHS explore the impact that greening activities could have in one neighborhood – in essence, bringing collective impact to life. The Leo Model Foundation was the first investor in the Nicetown-Tioga project, with a goal of inspiring others to help advance this type of work in the region. The list of people and organizations who have invested in this work include: the Leo Model Foundation, the City of Philadelphia, the US Environmental Protection Agency, Independence Foundation, Vistra, Robin Potter (PHS board chair), Peter Gould, and Anne Stokes Hochberg.

Thanks to a generous gift of $1 million from Robin and her husband, Dr. Peter Gould, PHS expanded on its long-time partnerships with two local community organizations, Nicetown Community Development Corporation (Nicetown CDC) and Tioga United, to more closely engage both communities in this kind of work. A community-driven greening plan affectionately named “Love Where You Live” was produced by the residents in these two neighborhoods, with gardening as the foundational element to transform the health and well-being of the neighborhoods for years to come. The long-term goal for this project is to not only scale up impactful greening efforts of residents in North Philadelphia, but also serve as an example of how community-led greening initiatives in historically disinvested neighborhoods can reduce crime, decrease trash and litter, increase access to fresh food, and improve job opportunities across both the city and across the country.

Working closely with trusted community partners at Nicetown CDC and Tioga United, PHS chose to pilot this new approach to “place-based” work in these particular neighborhoods, not only because they face critically-low tree canopy coverage and a lack of green space, but also because the communities are so engaged – a crucial factor in a community’s level of success with this type of program.

To begin the program, a community-led steering committee named The Green Team organized a grassroots survey of residents to identify priorities for the long-term plan. At every stage in the project, residents and local organizations were deeply involved in efforts to improve, green, and sustain their neighborhoods. Specifically, there has been a focus on creating ongoing job opportunities and training for residents. Peter Gould, a project donor, says, “This wasn't just a project being dropped into the neighborhood; it was a neighborhood project that was being driven by and supported by the residents and reflecting their priorities. That's the only way things like this work – when local folks want to be part of it and therefore are more likely to be part of implementing and sustaining this community-wide greening effort.”

The Impact of Place-Based Initiatives

Since the project kicked off in 2019 with the initial survey results driving future activities, close to 400 residents have been engaged, various cleaning and greening projects have been completed, and the more comprehensive three-year plan has begun to address key priorities identified by community members.

As one example of a neighborhood goal included in the “Love Where You Live” plan, the community will help ensure all eligible vacant lots within Nicetown and Tioga are cleaned and greened to reduce trash and deter crime. When asked what she would like to see different in her community, Tioga resident Linda responded, “The violence is what I like the least. I’d like to see it safer and cleaner.”

Reducing crime and greening historically disinvested neighborhoods is something Robin and Peter feel their gift can powerfully address. “I would hope to see this project demonstrate outcomes consistent with the research coming out of the Penn Urban Health Lab,” says Robin. This research has shown that transforming vacant land into clean and green space reduces crime, improves mental health, and helps forge deeper social connections between neighbors.

Already, Peter and Robin have witnessed firsthand the impact this project is having within the Nicetown and Tioga neighborhoods. “This project can serve as a linkage for individuals in these communities to connect with their neighbors, PHS, and other local partners for greater impact. It shows that what we're doing has currency in the community itself,” says Robin.

A Case Study for Future Investments in Greening

From the beginning, this project has been structured so there is a built-in evaluation and learning process that will enable PHS to demonstrate impact and improve future place-based initiatives, enabling communities across the U.S. to model the program. Peter says, "One of the things that's really important to us is that this is not just a three-year project, but something that provides a basis for continued impact.” By testing real-world solutions and measuring the results, PHS and its partners can continue to iterate and use this as a proof point to unlock future financial support.

“Philly's a wonderful place and super special, but there's nothing special about these problems that make them Philadelphia-based,” says Robin. Nicetown and Tioga represent the first communities to benefit from PHS’s updated approach, and the early reaction from residents prove extremely positive.

There have been numerous studies showing that urban greening initiatives can be similarly applied to improve the health and well-being of residents in major cities across the country, relying on a unified, data-driven greening model with engaged community leaders to drive success. Beyond the physical transformation of these communities, the emotional connection between residents grows and strengthens, with a more positive urban experience for all involved. With the proven mental, physical, and emotional benefits of greening plans, more U.S. cities can use this program model to transform their own communities with long-term success.

Interested in learning more about how you can make a philanthropic impact for the Priority Neighborhood work in Nicetown and Tioga?

Contacts PHS
Sorry, your browser is out of date
The web browser you are using is too old to view this site. Please update your browser or use Internet Explorer 11 or the current version of Microsoft Edge, Firefox, Chrome or Safari. Thank you!