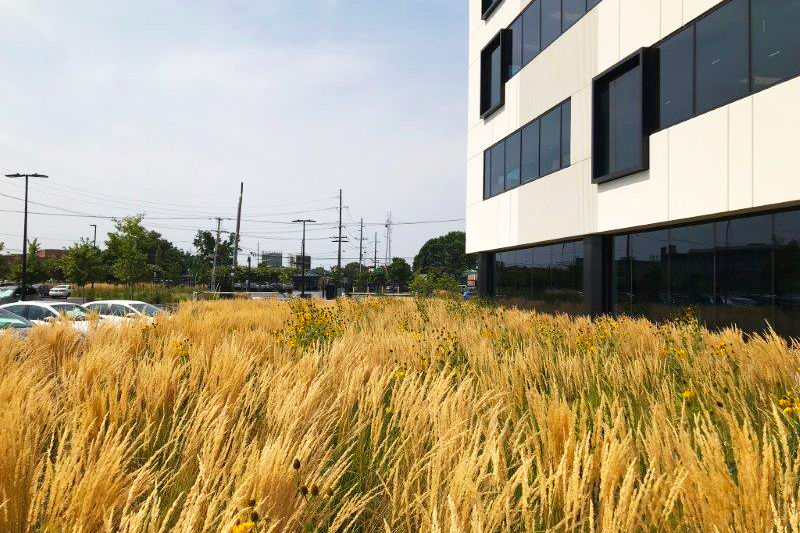 Environmentally friendly practices are gaining traction in the corporate world but being green is more than a trend for companies like Subaru. Since relocating their national headquarters from Cherry Hill to Camden, New Jersey, Subaru has joined forces with the Pennsylvania Horticultural Society (PHS) to design a corporate campus that reflects their long-term commitment to a healthier Earth.

Unveiled in 2018, the new headquarters is a symbol of progress for both Subaru and Camden. The move combines four regional Subaru facilities and unites nearly 700 employees under one roof for the first time, bringing a deeper sense of community to the company and opportunities for growth to Camden.

To usher in this era of change, the Subaru team invited PHS to take an advisory role in planning their sustainable landscape. As a long-time corporate sponsor of PHS’s flagship event, the Philadelphia Flower Show, Subaru entrusted the PHS Public Landscapes team to select diverse perennials, hardwoods, and grass species that would ensure a lively campus year-round.

“We brought PHS in because we were interested in sustainability and having a beautiful landscape that was unique and didn’t require us to install an irrigation system,” says Keith Metzger, Director of Corporate Real Estate and Administration at Subaru of America. “It was a tall order and a big challenge, but ultimately three years later we’ve been very successful.”

The 115,000-square-foot planting area was divided into three palettes and 22 zones, all of which required species tailored to the unique site conditions. For each zone, the PHS Landscape team focused on native species and Gold Medal Plants that would provide four seasons of interest, attract pollinators, and flourish in harsh conditions. Gold Medal Plants are selected yearly by PHS based on ease of growth, pest resistance and eye-appeal -- qualities that were all essential to Subaru’s sustainability mission.

“Before we got there, there was nothing but barren soil. It was a fresh site,” says Sam Keitch, Project Manager at PHS. “The end goal is to achieve a diverse and mature garden using organic practices.”

According to Keith, Subaru wanted the landscape’s style to reflect its green practices -- they chose to surround the headquarters with a naturalistic style of meadow-like planting (think famed designer Piet Oudolf) rather than a manicured lawn. “We wanted a juxtaposition of a very natural landscaping with an urban backdrop,” he explains. 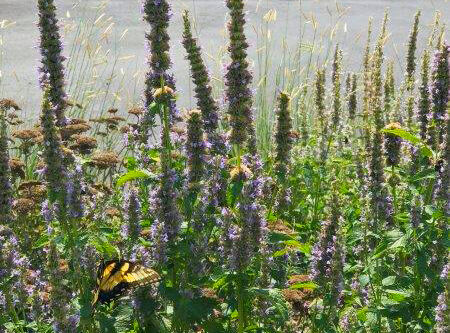 “The ecological activity across the site is impressive. This includes insects, finches eating coneflowers and bees covering the hyssop. You see a lot of activity because we’ve included so many natives and have recreated groupings of species that grow together in the wild. This has created a diverse habitat to support wildlife,” says Sam.

Along with creating a home for pollinators, Subaru’s new campus creates a feeling of well-being and purpose in its employees. A garden and outdoor seating area for staff provide the connection to nature that is often lacking in corporate environments. Employee volunteers plant, tend and harvest crops at the “Share the Love Garden,” which then benefits local food banks. According to Keith, “The pride is constant. People come up to me all the time commenting on the landscape. In its first year it was much sparser than it is now. This year, everyone is blown away by how much fuller and more beautiful everything is.”

As the garden develops over the seasons, Subaru and PHS continue to learn the ropes of managing the garden. Challenges have led to unique solutions, like incorporating wetland and Hibiscus species into areas with poor drainage. The site even includes a rain garden to counter the effects of flooding and mitigate stormwater runoff.

Companies around the world are adopting sustainable practices, including FedEx, Google and Philadelphia’s own Navy Yard. In 2016, the Navy Yard invited PHS to oversee its efforts in horticulture, arboriculture and landscape management during a redesign of the 1,200-acre business campus. As a result of this partnership, the Philadelphia Navy Yard now boasts a flourishing garden and has achieved Level I arboretum status.

The success of projects like the Navy Yard and Subaru’s headquarters are promising signs for companies looking to adopt sustainable projects – and the numbers prove it. Compared to their previous location in Cherry Hill, NJ, Subaru has cut down water consumption by 95% on a square foot basis!

“Sustainability is a huge part of who we are in terms of our brand, our cars and our overall culture,” says Keith. “Our customers expect a robust sustainability effort from us. The cornerstone of Subaru’s brand is ‘The Subaru Love Promise.’ Made up of five pillars, ‘Subaru Loves the Earth’ is the cause dedicated to preserving and maintaining our environment here and abroad.”

“This project epitomizes public beautification through horticulture,” adds Sam. “Subaru went above and beyond by covering their entire site with ornamental gardens. They didn’t plant any turf area, and everything is permeable.”

Moving forward, Subaru hopes to dive deeper into sustainability efforts and collaborations with PHS. “Our missions are very consistent and support one another,” says Keith.