How Keith Green Uses Gardening to Lift Others Up 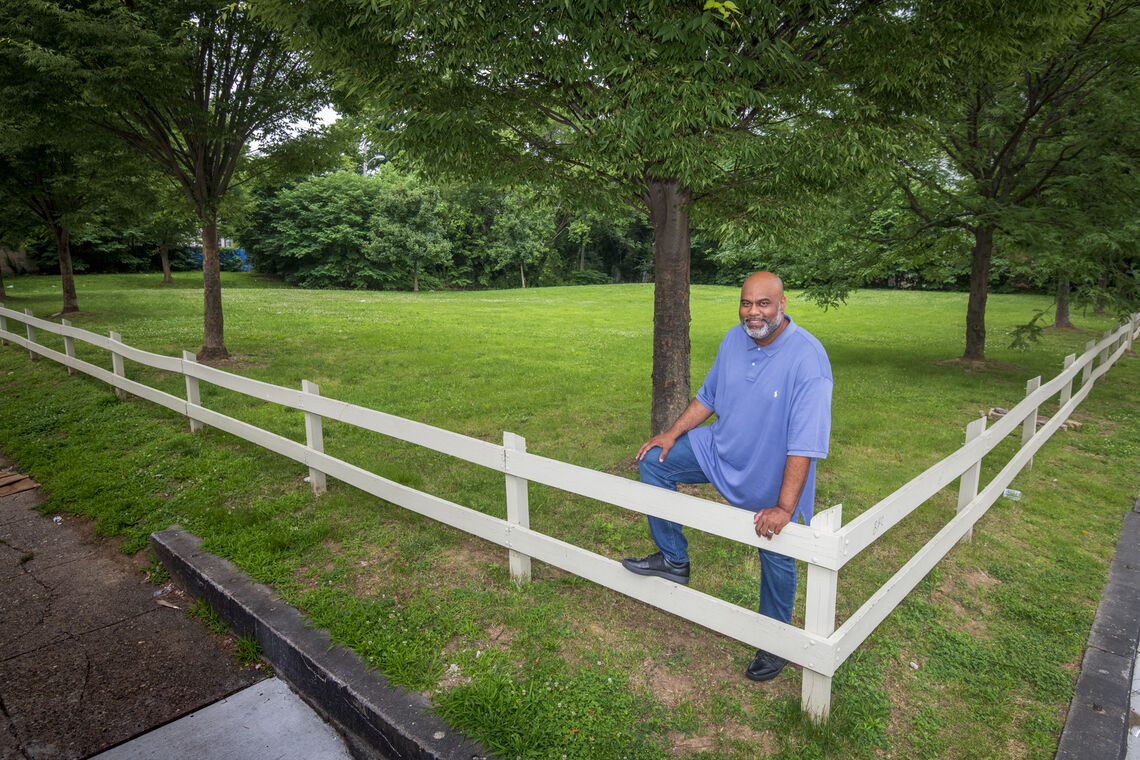 Keith Green, Senior Director of LandCare and Workforce Development, has been involved with PHS’s work to advance the health and well-being of the Greater Philadelphia region — in one way or another — since he was a kid. Growing up in South Philadelphia, Keith never imagined that the summers he spent toiling and tending to his grandmother’s garden would inspire him to pursue a career using horticulture to help others.

As a volunteer, then an intern, and now having worked at PHS for over 25 years, Keith has never lost sight of the driving force behind the work that he does: the community he serves.

Developing a Passion for Green Space and Giving Back

Keith learned to garden from his grandmother, who lived in Germantown, and would ask him to help with her beloved rose garden and vegetable patch each summer. He participated begrudgingly at first, but over time he developed an arsenal of gardening skills that he used to help others in the neighborhood.

When a staff member from the PHS Community Gardens team approached neighbors on Keith’s block for help to start a community garden, he jumped at the chance to get involved. Through this experience, his horticultural knowledge expanded, and he recognized the impact that horticulture has in urban environments. He especially loved the feeling of seeing how those green spaces positively affected his neighborhood.

Building Connections in the Community

Keith’s PHS career officially began when he worked as an intern from 1994-1996. After this, he was brought on as a full-time community coordinator for PHS’s community gardens initiative — the same program he used to volunteer for as a kid.

In this role, Keith loved working with the community to identify their needs and help meet them through gardening. He held this community coordinator position for seven years until 2003, helping to build numerous gardens throughout Philadelphia and share his knowledge of horticulture with other gardeners.

When PHS landed a $4 million contract from the City of Philadelphia to restore and clean vacant land on a city-wide level, Keith was brought on as the coordinator for the inaugural PHS Philadelphia LandCare program. As his job title and responsibilities grew within this program, Keith was able to have an even bigger impact on the communities he wanted to serve. In 2021, the program now oversees the cleaning and greening of 12,000 of Philadelphia’s 40,000 vacant lots, creating peaceful, clean areas and offering residents vital green space.

A Legacy of Lifting Others Up

Keith has now been with PHS for more than 25 years and has chosen to stay working with the LandCare program because of its long-lasting impact on neighborhoods and small businesses. When he first started with the LandCare program, he wasn’t sure if the initiative would be sustainable in the long term or have enough influence on communities. However, when Keith saw firsthand the community’s reactions to the now-green lots and saw neighbors using the land for picnics, barbecues, playing, and even a wedding, his mindset changed.

“You see this simple little fence, but it has so much more meaning than just a clean, vacant lot with a post-and-rail fence,” says Keith. “When you really dig into it, the program has so many benefits to the city and the community.”

Keith’s role has allowed him to drive the LandCare program to create economic opportunities for many minority-owned, small business owners, as they serve as PHS contractors for the cleaning and greening process. He says:

“Cleaning vacant lots creates economic opportunities for people. Out of anything, that is part of my legacy, and it's something I try to ensure my team understands. I see guys who flag me down and thank me, and even guys who aren’t doing this type of work anymore, and they tell me that we changed their life, we gave them a chance when no one would. That is why I get up in the morning — to see that kind of stuff. I’m not satisfied; I feel like I can always do more.”

Make a difference and create positive change in your community. Sign up to receive updates about volunteer opportunities with PHS!

Volunteer Interest Form
Sorry, your browser is out of date
The web browser you are using is too old to view this site. Please update your browser or use Internet Explorer 11 or the current version of Microsoft Edge, Firefox, Chrome or Safari. Thank you!