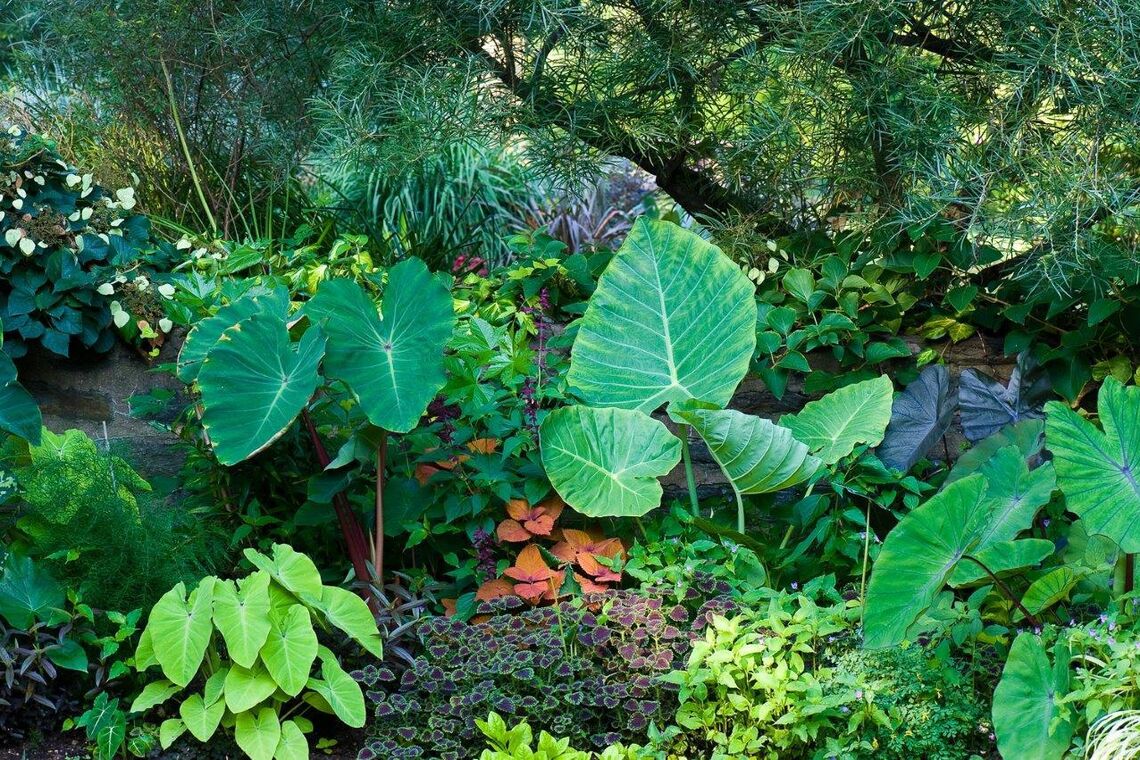 As the heat and humidity of a Philadelphia summer starts to set in, now is the time to plant tropicals in your garden. Their lush foliage will add a dramatic statement and splash of color to your setting and surely be a conversation starter all summer long.

“One of my favorite tropicals are elephant ears,” says Andrew Bunting, PHS Vice President of Public Horticulture. Bunting has grown quite fond of tropicals over the past 30 years working at Chanticleer, the Scott Arboretum of Swarthmore College, Chicago Botanic Garden and the Atlanta Botanical Garden.

“Large elephant ear-like leaves rise quickly from the ground starting in May and exponentially grow into bold clumps reaching up to six feet tall or more based on the cultivar,” he explains.  These natives of tropical regions are only hardy in United States Department of Agriculture zones 10 and 11 but can be grown as houseplants and summer annuals anywhere.

“For large shiny black leaves, Colocasia ‘Black Magic’ can’t be beat,” says Bunting. “By the end of the summer, the clump will be five feet tall.” He suggests pairing it with the pink flowers of Salvia ‘Wendy’s Wish’ or Salvia oxyphora, or the late summer lavender colored flowers of Salvia leucantha, ‘Illustris’ with its matte finish, nearly black purple leaves and green veins, for a beautifully stunning contrast. He also recommends other favorite elephant ears include ‘Elena’ and Xanthosoma ‘Chartreuse Giant’ with their large lemon yellow to chartreuse leaves.  Colocasia ‘Mojito’ has flecked green and purple foliage.

Another genus closely related to Colocasia is Alocasia. Alocasia macrorrhiza is one of the largest of the elephant ears with very upright foliage and the large arrowhead shaped leaves have an interesting ruffled edge. “I’ve been growing Alocasia plumbaea for years,” says Bunting.
“I love its lustrous black stems, leaves pointing skyward, and dark green leaves with black veins.”

Elephant ears, in general, will thrive in our region’s heat and humidity. Most of the Colocasia cultivars, especially those with yellow or chartreuse leaves, can take a fair amount of shade and Colocasia esculenta ‘Illustris’ can also be grown as an aquatic plant in a pond or ornamental pool.

Another tropical to consider is the banana. “There is no tropical that can transform a Mid-Atlantic garden like a banana,” says Bunting.  Bananas will generally thrive with heat and humidity and will grow especially quick with a soluble fertilizing of 20-20-20 applied every two weeks. “My favorite is the red Abyssinian banana, Ensete ventricosum ‘Maurellii’,” he says. Look for a plant in a three-gallon container that is about two feet tall.  By the end of the summer, it will have a sizable fleshy trunk and large expansive leaves.  “The large leaves are purple-red and are stunning in the garden.  Another favorite banana is Musa ‘Thai Black’ with notable purple-black stems and luxuriant green foliage.

If you like the feel of the tropics but don’t have a lot of room, try the diminutive dwarf banana called ‘Poquito’ which only reaches three feet tall. Also great for city dwellers, urban patios, front stoops, and those with limited space, Bunting recommends one of his all-time favorite cannas, ‘Orange Punch’.  “This plant stays small in stature at four feet and has dark green leaves and vibrant flowers all summer long that the Ruby-throat Hummingbirds love.” He is also fond of some elephant ears that stay small.  “For the shade try ‘Frydek’ which has black-green leaves with stunning alabaster veins, and ‘Jenningsii’ which looks like ‘Illustris’ but is much smaller in stature.”

For more ideas and to see these plants in a garden setting,  plan a visit to the beautiful public gardens managed by PHS throughout the City this summer.

For more information on growing tropicals in your garden, visit Ask PHS.

Learn More
Sorry, your browser is out of date
The web browser you are using is too old to view this site. Please update your browser or use Internet Explorer 11 or the current version of Microsoft Edge, Firefox, Chrome or Safari. Thank you!