Gifts From the Garden 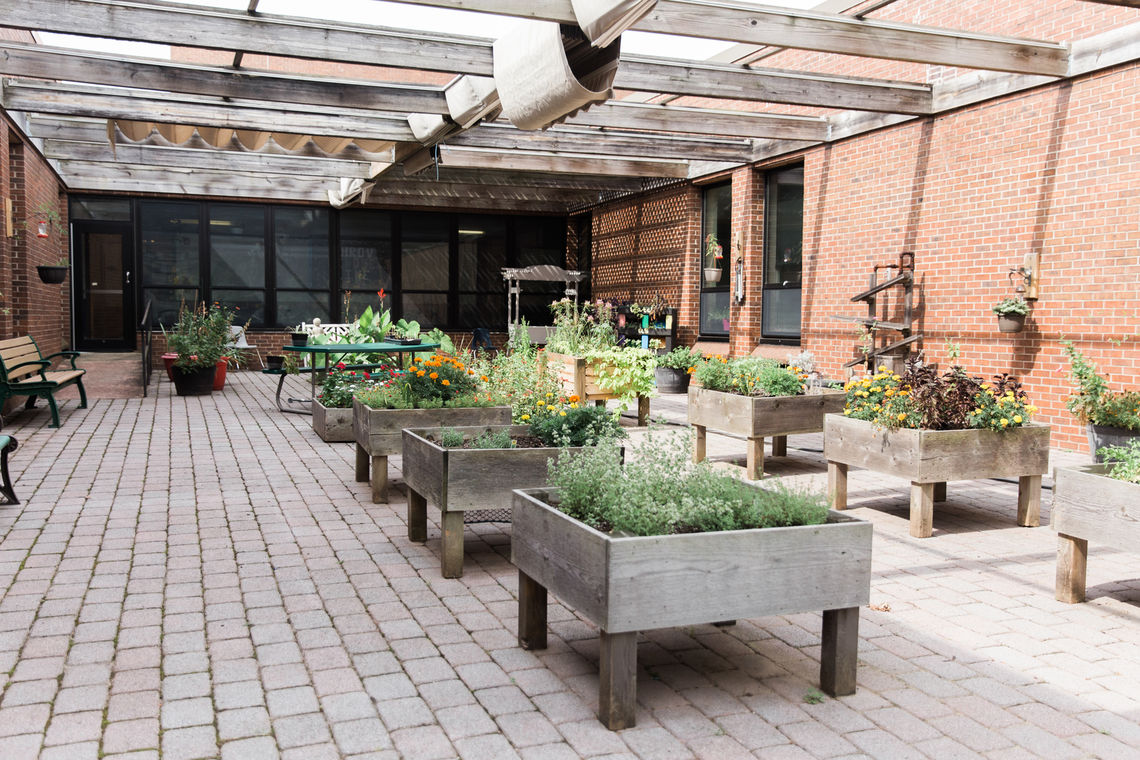 The lemony fragrance of geraniums, a wooden trowel handle in your grasp, the damp soil on your hands, a long sweet potato vine running through your fingers -- these are the gifts from the garden that come alive to students at Overbrook School for the Blind in Philadelphia, thanks to the dedication of Lee Stough, M.Ed., Special Education Teacher.

Stough has been teaching at the school for twelve years. Several years ago, he learned about Young Gardeners course and decided to enroll in the class. The Green City Teachers course gave him the hands-on experience he needed. “I brought back what I learned and adapted it to make it accessible for our student population,” says Stough. “Green City Teachers gave me the opportunity to collaborate with like-minded peers from other schools. It was a nice foundation for me,” he says.

“It started with six neglected raised beds on a rundown patio at school.  I decided to ask our program coordinator if I could start gardening in them, and it began to take off,” says Stough. “Take off” may be an understatement -- the Biddle Garden at Overbrook School won a blue ribbon in this year’s 2019 PHS Gardening Contest in the School or Children’s Garden category and won the contest’s online ‘Fan Favorite’ award this year.  In 2017 and 2018, the school was selected for PHS’s Garden of Distinction award. Over the last few years, the number of raised beds has grown from six to 21. A core group of volunteers in the Farm to Table group at Overbrook assist Stough, as does a new-this-year horticultural therapist, Rich Matteo.

Stough uses object symbols to lead his class through their school day. Every section of the day has an object symbol. When it’s time to go outside and garden, “I tell them we’re going to the garden and I pass around a plastic cucumber, onion, potato, and cabbage. I try to keep the symbols relevant to what we are growing.”

His class of five non-verbal students in wheelchairs has grown to love their time outside working in the raised beds – which make gardening much more accessible to them. “They love the fragrance of marigolds, sunflowers, and geraniums,” he says. “For some of the students who see reds, oranges, and yellows, they love the zinnias and the columbines. Some find blues and purples as their dominant color.”

He notices that when his students are outside, they quiet down and smile – “You can tell they are in a happy place,” he says. The students use their hands, or a trowel, depending on their comfort level.  Some are more tactually defensive, while others love the texture and softness of the celosia’s brilliant ‘rooster comb’ plumes and dangling sweet potato vines. “Their expressions say it all. They like the fragrance of the herbs, sage, and mint -- sometimes basil is too strong, and their faces will scrunch up,” he says. “Spending time outside helps with their whole school day. They come back inside calmer and more focused."

He begins growing plants and vegetables for the next spring season in the classroom. “I set up my students in an assembly line -- one separates the six packs, the next pokes a hole in the bottom of each one, and as they pass it down, they add soil, drop in the seed, and water. In the spring, we transplant the seedlings out to the raised beds and care for them outside. This year, the class grew vegetables, including peppers, tomatoes, purple beans, swiss chard, romaine, kale, pumpkins, cucumbers, zucchini squash, and lots of okra, as well as herbs and flowers. Combined with the other growing areas on the property, Overbrook grew 900 pounds of produce this year. “What doesn’t sell on the produce cart or get used in the kitchen is donated to the Upper Darby Food Bank,” says Stough.

Stough is looking forward to the opportunity to grow the gardening program with the addition of their new net-zero greenhouse and the Horticultural Therapist now on staff. “The administration and teachers are very supportive, and as time goes on, the importance of horticulture in the curriculum will grow.”

The PHS Green City Teachers course was the perfect way to begin,” he says. “I got to talk to some very knowledgeable gardeners, and the energy and wisdom from PHS staffer Sally McCabe were very engaging. She made it a lot of fun,” says Stough.