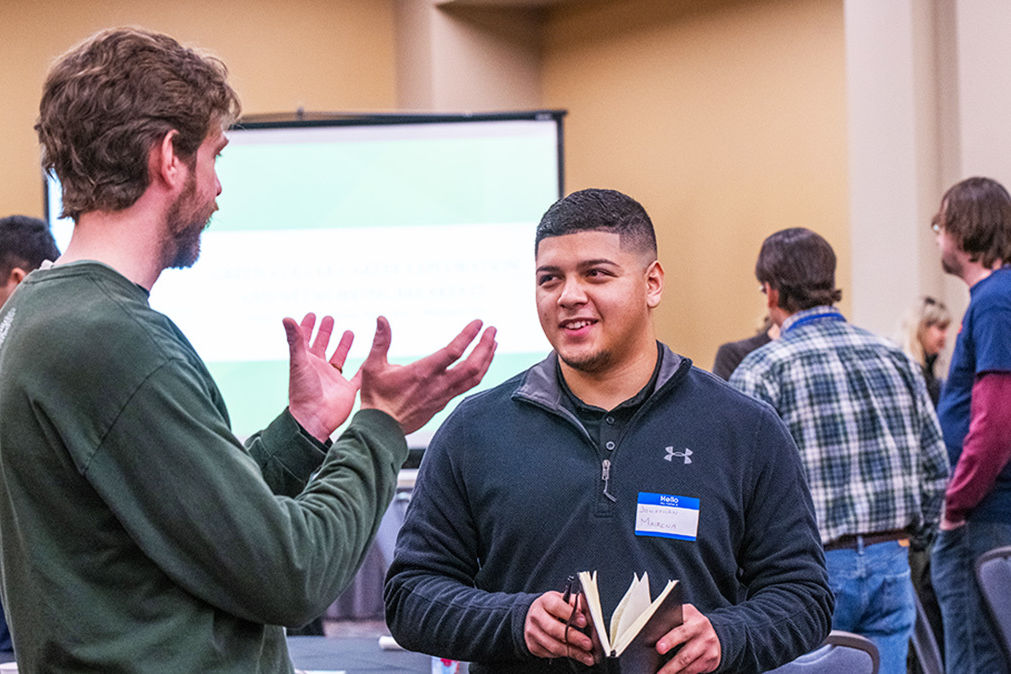 PHS proudly partnered with Seed Your Future, a non-profit organization that inspires young people to pursue opportunities in the field of horticulture, to present the first annual Green Collar Networking Breakfast at this year’s Philadelphia Flower Show earlier this month. The breakfast offered students an opportunity to speak with professionals to learn about the wide range of opportunities growing in the field.

More than 100 participants attended the breakfast, including students from Rutgers University, New Brunswick, and Pennsylvania State University. A variety of speakers made an impact by telling their stories about how they began working in the field of horticulture and how their careers paths evolved to where they are now.

Barbara Pierson, Nursery Manager at White Flower Farm in Litchfield, Connecticut, didn’t start out in the garden. “At first I wanted to be a nurse. I grew up in the horticulture industry, but I didn’t want to do it because my parents did it.”

Early in her career, she grew to love and appreciate the work that goes into the art of gardening. “My passion has always been teaching young people how to grow plants because I believe horticulture can be learned and that it is a mix of both art and science together,” says Pierson.

Another impactful speaker at the event was Mason Day, who manages Community Engagement and Support for J R Peters Inc, a fertilizer company in Allentown, Pennsylvania. He has spent most of his career helping organizations develop strategies to communicate to the public.

“I picked up a lot of knowledge about plants while I was in high school because my parents had two horticultural businesses,” Day said. “But I decided that I didn't want to pursue a career in horticulture because in high school teachers often want you to be doctors, lawyers, and engineers.” he explained.

Day went on to pursue his degree in Agricultural Science at Cornell University. From that point on he knew that he had found his dream job in the industry he wanted to be in. After graduating he continued working on the business and science side of agriculture.

Ameen Lotfi, a student at Rutgers University studying both Agriculture and Food Systems and Ecology, Evolution, and Natural Resources, became interested in agriculture through books, especially in American Literature.  “I lived in Berkley, California, for some time to study Liberal Arts and I saw that organic farming was the norm there and that’s when I became more interested.” He volunteered on a farm and fell in love with the study of agriculture.

“My goal is to start something along the lines of a consulting agency that deals with ecological landscapes that can produce foods, especially in urban environments,” says Lotfi. He learned that a few speakers had a path very similar to his own at the Green Collar breakfast.  “Working in the field of horticulture isn’t always the first choice in a career path,” he says. “Sometimes it takes multiple experiences for us to understand what we love to do.”

Before the breakfast ended, students were told about the many careers listed on the Seed Your Future website. Additional resources on the website include scholarships, internships, and horticulture camps to help assist students with their search for work in the field of horticulture.

PHS is working to create job opportunities in the horticulture and landscape profession. Learn more about this work with our Workforce Development Programs.

explore workforce development
Sorry, your browser is out of date
The web browser you are using is too old to view this site. Please update your browser or use Internet Explorer 11 or the current version of Microsoft Edge, Firefox, Chrome or Safari. Thank you!