A Leader and a Friend 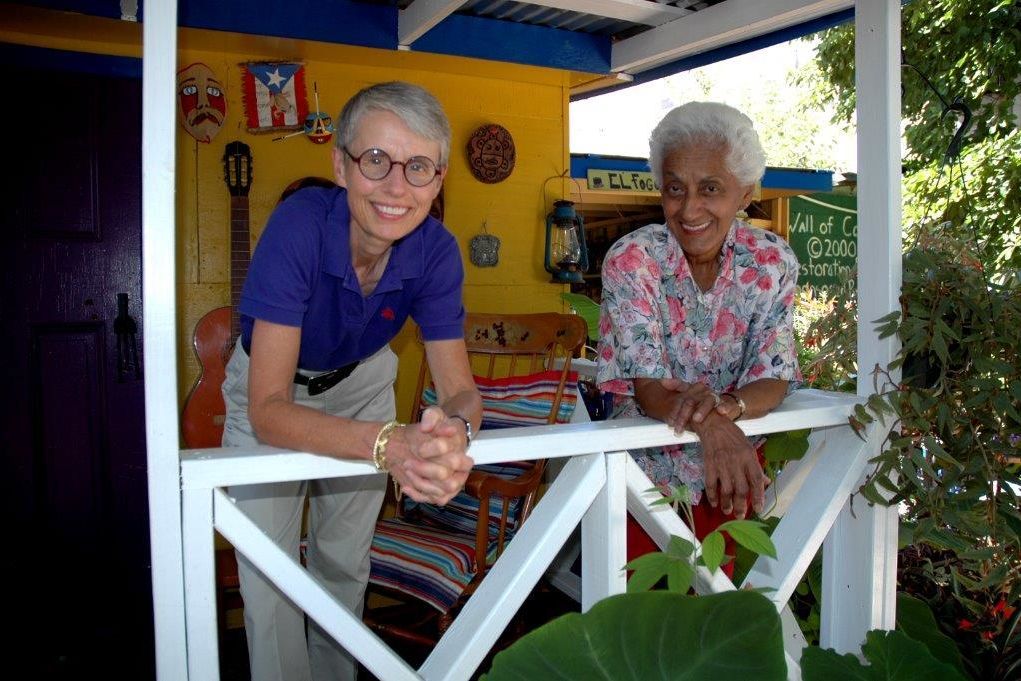 Tomasita Romero carved new paths to connect her neighbors with one another in the garden.  She shared her vision and love of gardening with neighbors, friends and family in the North Philadelphia community of Norris Square for more than 50 years, and in the process transformed a vacant, forgotten plot of land into a vibrant and lush garden and community gathering spot.

Born in Ponce, Puerto Rico, Tomasita moved to Philadelphia in 1962, and soon after to the Norris Square neighborhood. She was one of the founders of Grupo Motivos in 1973, a collective of dedicated women. Tomasita also served for many years as the president of the Norris Square Neighborhood Project Board and was instrumental in helping children achieve academically by stimulating them through environmental studies and experiences.  She and her friend, Iris Brown, started talking about their ideas for transforming the vacant property into a community garden in the 1980s. Together these powerful visionaries were determined to take action and make their community safer and more beautiful.

Norris Square was selected by PHS to be one its focus areas for greening  in the late 1980s, but a high crime rate on local street corners and vacant lots had to be reversed before the greening projects could begin. During this time, Tomasita and Iris kept their vision of Norris Square as the first Hispanic Greene Countrie Towne, envisioning gardens as a way to honor their culture.

Tomasita, who lived at 2nd and Susquehanna, and Iris, held candlelight vigils to keep the drug dealers away from the lot that had become home to an open air drug market. “She was brave,” says Wanda Romero, Tomasita’s daughter. “She served on the local town watch for the 23rd, 25th and 26th Police Districts in the neighborhood.”

Once crime in the neighborhood lessened, Tomasita and Iris, with the support of PHS, Norris Square Neighborhood Project, and the Penn State Urban Gardening Program, began working together to keep their culture alive through horticulture and food. Eileen Gallagher, PHS Associate Director, Community Gardens, worked with Tomasita and Iris to build the gardens. “We became a team that shared the same vision,” says Gallagher.  “To create a place that expressed their cultural heritage and a space where the children could play safely.”

The women of Grupo Motivos dreamed of growing gandules (Pigeon peas) and ajices, (small sweet peppers) so they could prepare the meals they had grown up with in Puerto Rico, not only for themselves, but for their neighbors.  “They cooked meals over a ‘fogoncita,’ a traditional way of cooking meals in Puerto Rico,” says Justin Trezza, PHS Director of Garden Programs. Tomasita and the women had events with music and bomba dancing. “She was dedicated to teaching the children about their cultural roots and history, through gardening. With Iris, the women worked to generate a sense of hope and pride in the youth.

Once she retired from her job as a teacher’s aide at Hunter Elementary School, Tomasita impressed upon both administrators and teachers the importance of student involvement in greening activities within the community.  She gave all of her time to the Norris Square community, teaching the children how to cook meals with Spanish spices. “She was famous for her flan, a Spanish custard desert,” says Romero.  “She would cook it for everyone for the holidays, including the police department.”

Tomasita and Iris were awarded a PHS Certificate of Merit for their work in Norris Square at the 171st Annual Meeting on November 17, 1998.

When Tomasita could no longer go out to Las Parcelas, she continued to garden at her own house. “She always opened up her home and gardens to everyone,” says Justin.

In a recorded interview about Las Parcelas, Tomasita said, “For me the garden is therapy, the beauty makes me happy, and makes other people happy.”  La Casita, a marigold-yellow reproduction of housing that existed in Puerto Rico before World War II, is the centerpiece of the garden. Tomasita and Iris sketched that house and built it with neighbors as a reminder of their Puerto Rican roots. The front porch overlooks a sandy front yard edged with colorful flower beds. Nearby, an orchard is planted with peaches, pears, nectarines and grapes. A mural in the distance includes familiar Puerto Rican images: the flag, the outline of the island, and native flora and fauna. Tomasita passed away at the age of 87 on Friday, September 6.  La Casita stands in the garden today as a smiling reminder of Tomasita’s love for the garden, the people, and her culture.