PHS prioritizes your health and safety. Learn more about our Covid-19 procedures and guidelines.

Gardening for the Greater Good – November 2019 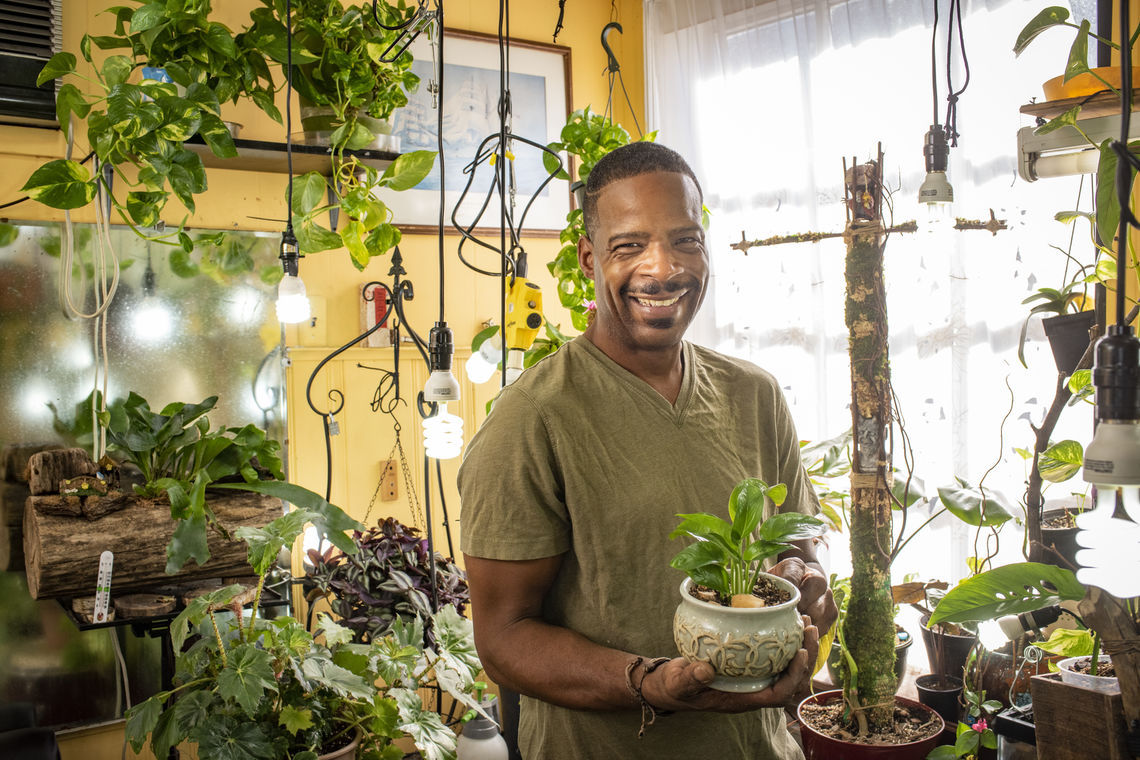 Nakia Maples, a.k.a. the “Philly Plant Guy” has always loved plants. As a teenager, he was inspired by a friend’s house filled with plants. “Plants were everywhere – overhead, on the coffee table, and in every room,” he remembers. This motivated him to create a similar sanctuary in his own home. Today, he cohabitates with more than 350 plants (most of them aroids -- members of the Araceae family) thoughtfully placed or hanging throughout the rooms of his South Philly house. While the plants provide him with calmness in his everyday life, he also appreciates them for their ability to bring people together. It is this power that he has harnessed and evolved into yearly plant parties – gatherings in his home where dozens of friends, neighbors and Facebook followers come together to swap plants, share experiences and tips, connect face-to-face for the first time, and form long-lasting friendships.

Maples was originally a member of the South Silly Facebook group. “I was invited by the group to be the go-to person to answer questions about plants and gardening because I lived with about 150 plants at that time,” he says. As the group grew, they named him the “Philly Plant Guy.” When membership grew to about 5,000, Maples decided it was time to branch off and start his own plant group in July 2017.

As his Philly Plant Guy Facebook page grew and grew – as if sprinkled with a magical fertilizer – more people wanted to learn about soils, building terrariums, and repotting plants. “I felt that I could not do this by videos or pictures online,” says Maples, “so I created the parties to get together, learn about horticulture, and have fun.” His free plant parties are meant for people to come, enjoy themselves without spending money, and leave with a plant. Typically eight to 12 hours long, the parties start with a swap, followed by workshops ranging from mixing soils, to terrarium-making, to prepping clay pots. He holds annual parties for his Philly Plant Guy Facebook page, in addition to a party for every thousandth member. Just shy of 2,000 members, he anticipates holding another party this winter. He also offers what he calls a “Plant Date,” which is open to his group members who would like to talk with him personally about horticulture and gardening, in addition to smaller swaps and gatherings throughout the year.

Maples always has plants on hand that he loves gifting to his party guests. Attendees also bring plants to give away and share with others. “It’s great to share with others – newcomers and novice gardeners can participate and leave with education, and a plant to love -- and hopefully more joy for horticulture.” He welcomes guests even they don’t have a plant to trade. “You can still come and commune and have fun and leave with a new plant. My house is also set up so that people can view different ways of lighting and plant placement.”

The 2019 Philadelphia Flower Show was a game changer for Maples. “Seeing the exotic tropical plants in the international competition last March introduced me to cool, exotic plants and extended my joy for horticulture,” he says. After being inspired at the show, he sought out a few exotics for himself and is excited to show them to guests at his next Plant Party. “They’ll be able to see a nice display of exotic philodendron, a native of Mexico, the West Indies, and Brazil, as well as anthurium, a native of Columbia and Ecuador – plants they may have never seen before.”

“I believe plant lovers are open to sharing themselves with nature and each other,” he explains. “It’s about caring for something, and with caring comes empathy, patience and diligence. It’s about being attentive --- in order to take care of a plant you need to interact with it almost every day. It’s about being gentle and keeping to a routine – it’s learning how to nurture something.”

Maples adds, “If I can just put a glimmer in someone's eye or make them a little bit more enthusiastic about horticulture and gardening, like the 2019 Philadelphia Flower Show did for me, then my job is done.”